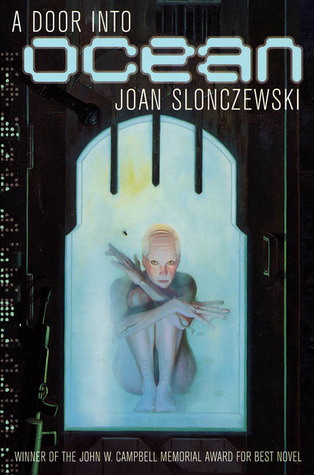 A Door into Ocean is the novel upon which the author’s reputation as an important SF writer principally rests. A ground-breaking work both of feminist SF and of world-building hard SF, it concerns the Sharers of Shora, a nation of women on a distant moon in the far future who are pacifists, highly advanced in biological sciences, and who reproduce by parthenogenesis–there are no males–and tells of the conflicts that erupt when a neighboring civilization decides to develop their ocean world, and send in an army. [Source]

Unlike many genres, science fiction and fantasy writers often face the uphill task of world building. If the story is set anywhere other than the planet Earth, and concerns any characters that aren’t human, it’s the author’s arduous task to make this place have weight and meaning in our imaginations.

This can be a difficult balancing act, because instead of jumping right into the plot, science fiction first requires that the reader understand the “rules” of this particular universe. I say this because some critics (including some in my book club) became frustrated by A Door into Ocean due to its rather slow exposition. And it does take more than fifty pages for the planet of Shora to even make an appearance. First, Slonczewski has to establish the two worlds.

A Door into Ocean will draw inevitable and accurate comparison to novels such as Dances with Wolves, or films like Avatar and Disney’s Pocahontas. Often called the “white savior” trope, these stories all share a basic narrative structure. An outsider from a more “advanced” culture will come to a world populated by “savages”. Over time the outsider will become more and more drawn to the natural and pure ways of the natives, and in the process will betray his own people, who are often ruthless, violent, and mercenary. This is not a criticism. There are only so many stories to be told in the world; what separates good novels from the merely mediocre is the author’s ability to bring an old story to life in a new and interesting way.

Joan Slonczewski succeeds in this area by making her novel a sort of philosophical thought experiment on the nature of pacifism. Populated solely by women and daughters, the ocean world of Shora has been left untouched for millennia. The “Sharers” have a disorganized, almost anarchist society that has no concept of obedience, and therefore no concept of resistance. As the invading “malefreaks” attempt to impose martial law on the planet, the questions remains if the Sharers will remain true to their nonviolent history, turn to a violent future, or be wiped off the face of Shora entirely.

Even though it takes awhile to get there,  the planet of Shora is a fascinating and dangerous place. It is no idyllic paradise, and the dangers faced by the Sharers by their own natural environment gives the narrative a surge in excitement once it finally sets down on the ocean world.

The thing I love about good science fiction is the interesting discussions it can spark. I’ll enjoy chewing over the ideas presented by A Door into Ocean for the next couple of days to see what I uncover.

You can find A Door into Ocean here on Amazon or here on Book Depository.

One thought on “Book Review: A Door Into Ocean by Joan Slonczewski (1986)”